May, 2021, marked the 10th Anniversary of Cycling4Diversity which began as a one off event that developed into a decade long initiative.
The foundation is the brainchild of Ken Herar, who says the foundations objectives, of bringing awareness to cultural divisions that exist across the province, remain unchanged over the years.
His team of dedicated volunteers have visited over 150 schools, in the 10 years, since the foundations inception. "Our objective is to encourage youth and young adults to become more proactive than reactive to issues of race relations and social acceptance" says Ken Herar, founding director.
The foundations goal today, is still the same, but with more passion, greater grass roots organization, and increased activity on various social media platforms. As communities grow and become more diverse, our key to keeping communities inclusive and together is raising awareness and discussion on this very topic.
It was important for C4D to celebrate this 2021 milestone, but due to provincial mandates, it was almost impossible to ride from school to school. Herar and his wife, Pamela, then went on to create Spinning4Diversity, to act in harmony with Covid protocols.
Spinning4Diversity then became a virtual discussion, while riding stationary spin bicycles over a weeks span which was aired live, hosting a variety of local guests from around the Fraser Valley. Engaging community leaders in conversation over important issues affecting Canadian's from coast to coast, all while streamed live via Facebook, Instagram, and YouTube. Several moderators, chosen for their commitment to community service, were invited to host each session, which began every hour on the hour. The event was a huge success and succeeded in continuing the important conversation of inclusion for all.
After it's inaugural week, S4D was expanded  to create continued dialogue throughout the summer, through virtual conversations and dialogue. At the end of August 2021, S4D over a 24 hour span, brought together fifty plus participants, from all over British Columbia, to continue the message of diversity, inclusion and tackling mental health and wellness during these trying times.
One of the foundations key components in the proliferation of diversity, is identifying what differences are keeping us apart, and working towards solving those differences, making a more equitable and safe place for those who feel disenfranchised because of  race, gender, religious convictions, or sexual orientation, helping build safe spaces and allowing diversity to work full steam, to its fullest potential.
The foundation has also given several thousand C4D and S4D t-shirts away to visably promote diversity among youth and young adults. T-shirts have been worn by Prime Minister, Justin Trudeau, along with other dignitaries and public figures.
Founder, Ken Herar, has been at the fore front of human rights advocacy, organizing grassroots events in solidarity, and support of, Black Lives Matter, Indigenous Lives Matter awareness at the site of the former St. Mary's Residential School located in Mission, BC, Anti-Asian Hate Awareness gatherings, and helping to organize the mega anti-bullying event for a 13 year old transgender student who was severely assaulted, being attacked in a Mission, BC, school yard by peers, which saw well over four thousand participants and was broadcast globally on networks such as CBC, the BBC and many global social media and news outlets.
Cycling4Diversity has received yearly Provincial and City/Municipal Proclamations declaring Cycling4Diversity Week each May.
The most recent sessions can be viewed on the Spinning4Diversity Facebook Page along with additional foundation information on Cycling4Diversity’s Facebook Page.
Herar is the proud son of a Pioneer Indo-Canadian family, a husband to Pamela of Metis decent and a step-father to Meghan. He is currently a city councillor with the City of Mission, since 2018.
Ken’s experience includes several television and radio appearances on topics of diversity and race relations. Ken is a diversity columnist with the Abbotsford News, contributing since June of 1995 and contributes to other publications/newspapers within the Black Press Group. Ken also writes guest columns for the South Asian newspapers, the Punjabi Patrika and The Link.
In 2007, Ken received the "Champion of Diversity" at the Fraser Valley Cultural Diversity Award and also received the Arts and Culture Service Award and a Certificate of Accomplishment from the District of Mission. The Community/Literary Ambassador Award, from the Writer's International Network in 2014. The Breaking Barriers recognition at the 8th Annual South Asian Darpan ExtraOrdinary Awards. Bestowed with the Paul Harris Fellow recognition from Rotary International. Ken is also a multi award winning athlete, a active tennis player in which he holds a former provincial and national ranking.
Ken has been given special permission/clearance in order to provide tennis lessons to inmates inside all levels of federal institutions. This has helped to build community skills and provide a positive outlet for those serving long term sentences. Ken served on the Citizens Advisory Committee from 1998-2000 at Mission Institution.
Herar’s future goals are to expand the foundation across the globe by travelling to a variety of destinations and to expand the foundations  virtual audience. As plans to expand the ride into the United States were paused due to pandemic restrictions, this initiative will be perused once restrictions have safely lifted.
Posted by Ken Herar at 11:01 AM No comments:

Award winners from the 2017 Darpan Awards 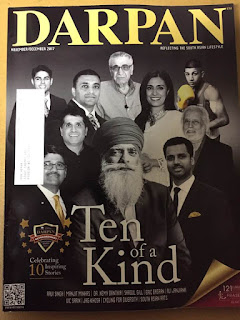 Reciepent of the 'Breaking Barriers' Category at the Darpan Awards 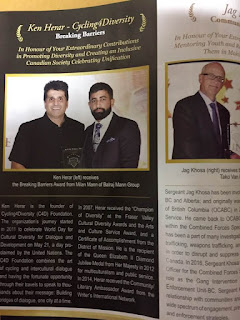 Presentation as part of Mission Moments Series on Sikh History 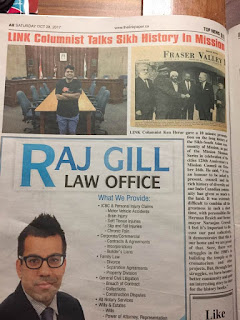 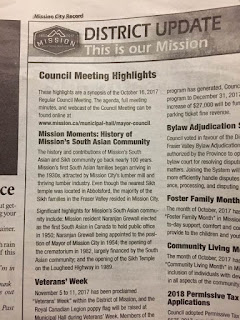 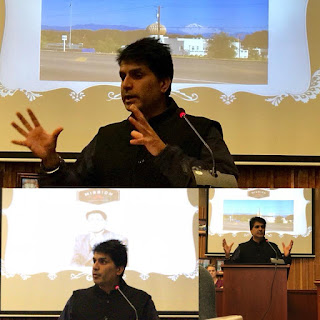 A letter from Premier Horgan in regards to Darpan Awards 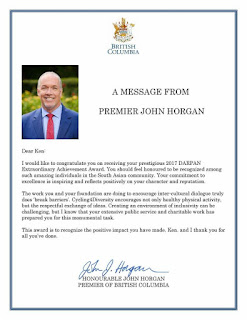